ELAN® delivers one-touch control, while SpeakerCraft® gets the joint jumping, and Panamax® power conditioning keeps everything up and running.

CARLSBAD, CALIFORNIA —  When you meet the owners of Newport Beach’s famed beach hangout Mutt Lynch’s, you immediately know you’re not only dealing with local history, you’re dealing with family history. This 40-year old, family-owned dockside restaurant/bar is named after the owner’s grandfather, a WWII veteran, and is one of those places that the locals would like to keep a closely guarded secret. 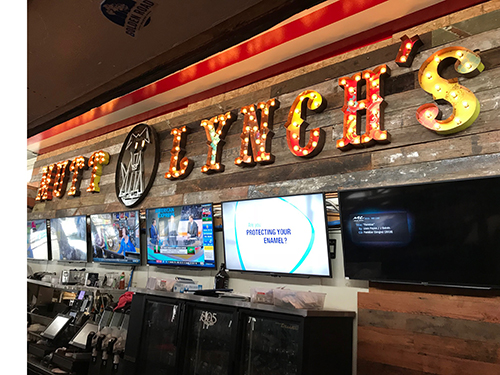 Despite Mutt Lynch’s much-appreciated rustic vibe, the bar’s AV system had become extremely outdated. All the speakers had blown, staffers could not easily control the space’s AV, and there was no protection against the frequent power spikes and surges the venue was experiencing.

Rick Geller, the owner of local integration firm Vector Media Solutions, was initially hired to just replace the venue’s failing speaker system. However, what this wonderful and immensely popular old beach hangout needed was a complete renovation, one that would do the Lynch family proud. And Geller knew ELAN® would be the perfect automation system to keep Mutt Lynch’s vibe rolling for generations to come.

“I suggested ELAN for two major reasons,” Geller began. “One was the price point. The system I was replacing, along with being old, was also quite costly and the Lynch’s didn’t want to deal with another huge price tag. The other was knowing I could easily upgrade and integrate ELAN quickly and seamlessly. Add the ease-of-operation factor, as Mutt Lynch’s is typically jammed with people and the staff has no time to deal with clunky tech, and ELAN was an immediate match for this install.”

Once approved, Geller installed three ELAN gSC10 controllers and an ELAN 1616A amplifier to immediately address the staff’s need for hassle-free control. He also added an ELAN remote to help them manage content across thirty-three televisions, and an ELAN wall-mounted keypad to control the venue’s AV with ease.

To replace Mutt Lynch’s sound system, Geller brought in 13 SpeakerCraft® outdoor speakers that immediately took the music experience to new heights and perfectly handled the rough elements inherent with a bar on the beach.

After opening in 1976, Mutt’s had to move in 1982 after a fire destroyed their original Balboa Peninsula location. The 100-year old brick building at their current Newport Beach location presented Geller with a few interesting challenges, not the least of which was its unique rafter ceilings.

Lynch also made it clear that it was important that this installation is done without changing the venue’s aforementioned “vibe” as rafter ceilings revealed wiring and power plugs, providing the kind of rustic-beach feel the place was known for.

“The rafter ceilings leave a lot of the wiring and power plugs exposed so you see that stuff, and that is the style they wanted to keep. It is all part of the vibe going on there. There’s t-shirts and the like on the walls and they wanted me to preserve this feel,” Geller explained. “So, I used j-hooks for the wiring that went right down to the RE42 OmniMount rack I used, which was also visible to patrons, something the owners also loved.”

Once the “don’t disturb this vibe” mantra was delivered, the ELAN system’s ease-of-use took center stage. “We are always a bit apprehensive to get new technology and then figure out how to work with it, but with our new ELAN control system it was easy to learn, and every employee picked it up immediately,” said owner Ryan Lynch. “There was literally no learning curve and the app makes it easy to control the AV via the staff’s iPhones.” 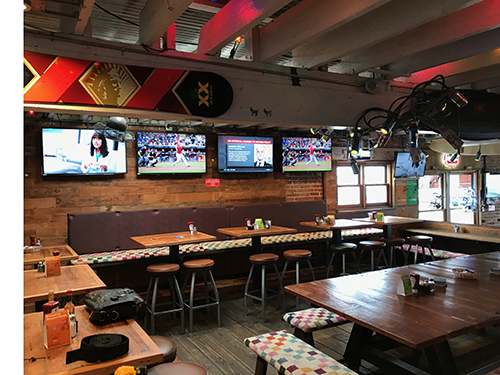 Geller was even able to customize the ELAN controller with a button on the app called “Game Day” that is used during the football season that allows staff to instantly switch the AV system to the various NFL football games taking place on Sunday afternoons.

“The BlueBOLT software helps self-heal the system and also provides remote energy management functionality,” Geller explained. “This perfectly protects against the spikes and surges that can happen. BlueBOLT provides the ability to easily control and monitor the system’s power source remotely, such as programming the entire system to reboot at a specific time. It all but eliminates service calls.” Geller also added the Furman F1500-UPS battery backup for mission-critical equipment that needed a smooth power down in case of a power outage. “The Furman name carries a lot of weight. And that name simply looks great to have in the rack.”

That’s the kind of insight Lynch was looking for when he initially hired Geller for the quick speaker swap out, and the reason why this project ultimately turned into so much more.

“Working with Rick Geller and Vector Media Solutions was a great experience. They listened to our needs, were easy to work with and executed the plans quickly and efficiently,” Lynch said. “They were very flexible in dealing with our restaurant hours and coming in to install at nighttime as to not disturb regular business. What we were looking in a new AV system was one that was of the very high quality yet easy to control and that is exactly what we got.”

The only negative news to come out of this installation is the fact that Mutt Lynch’s secret the locals are trying to keep may not be such a well-kept secret, after all.

Vector Media Solutions is a Newport, CA-based residential and commercial AV, automation, and security installation specialist. They have been successfully designing and installing AV systems for everything from small homes to large mansions and commercial facilities for over two decades. The company provides more than just home and commercial AV solutions, they provide a technology lifestyle geared towards each individual customer. www.vectormediasolutions.com

ELAN®, now part of Nortek Security & Control, develops an award-winning line of whole-house entertainment and control solutions distributed through a comprehensive channel of select dealers throughout the United States, Canada, and countries worldwide. The ELAN 8 update was honored with the “2017 Human Interface Product of the Year” award and continues to expand its intuitive functionality with security, climate, surveillance, and video distribution products and integrations.

Nortek Security & Control LLC is a global leader in smart connected devices and systems for residential smart home, security, access control, AV distribution, and digital health markets. NSC and its partners have deployed more than 4 million connected systems and over 25 million security and home control sensors and peripherals.  Through its family of brands including 2GIG®, ELAN®, Linear®, GoControl®, IntelliVision®, Mighty Mule® and Numera®, NSC designs solutions for national telecoms, big-box retailers, OEM partners, service providers, security dealers, technology integrators, and consumers.
Headquartered in Carlsbad, California, NSC has over 50 years of innovation and is dedicated to addressing the lifestyle and business needs of millions of customers every day.  For further information, visit nortekcontrol.com.