After an equipment failure and emergency replacement, The Gorecki Center at the College of St. Benedict upgraded to an easier, more reliable and more capable control system.

PETALUMA, CALIFORNIA — The Gorecki Center, an event and conference building at the College of St. Benedict in Minnesota, faced a problem familiar to the tech integration industry — the aging technology that controlled the projectors, speakers and microphones was failing, too old to repair, out of manufacture, and far less capable than modern solutions. When the legacy automation system finally did fail, Rogers, Minnesota-based integration firm J. Becher & Associates came to the rescue by installing an Nice/ELAN® control system, giving managers far better control, reliability and new mobile access. 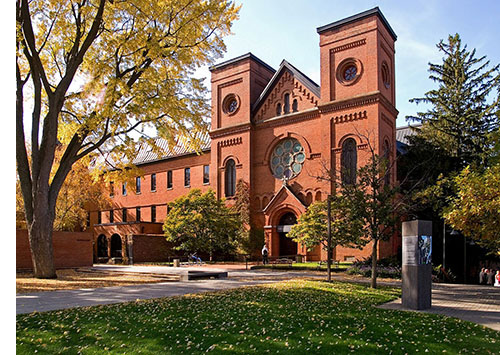 According to Greg Elsner, Technology Manager at  J. Becher & Associates, “the existing system may have served them well in the past, but modern technologies have improved in basically every aspect,” he said. “The old system didn’t have two-way feedback, so there was no way to check the power or volume status of microphones and speakers without manually testing them.  Microphones couldn’t be controlled individually. The system used outdated component video switching, required manual adjustments when convertible rooms were combined or separated, and didn’t offer any form of mobile access.”

With the installation of a new Nice/ELAN® system, these concerns are now a thing of the past for The Gorecki Center. Two-way feedback tells managers what is turned on and at what volume, individual microphones can be activated as needed, VGA and HDMI video switching provides ultimate flexibility, one-touch presets enable favorite room configurations, and the Nice/ELAN mobile app offers full control from any connected mobile device.

“The improvement is like night and day,” Elsner reflected. “The level of control is much higher, operation is far simpler and more automated, and the audio and video quality is improved. With better control, plus six new projectors and screens, the total digital experience is unrecognizable from what it was a few months ago. And that goes for both the viewer and the presenter.” 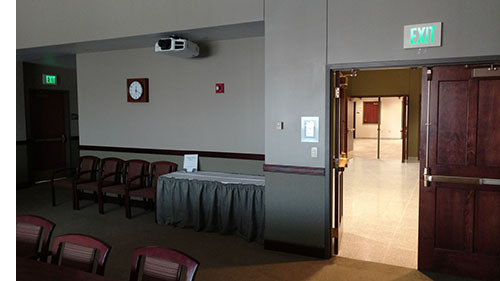 The upgrade had been under consideration for some time, so when the component video switcher began to fail, The Gorecki Center took steps to locate an identical “new” switcher to keep the existing system running. They soon realized the legacy replacement parts were no longer available or supported by the manufacturer of the existing system and a full system upgrade was necessary.

Because the original system arrangement was replicated in the upgrade, regular presenters at The Gorecki Center were not troubled with having to learn an entirely new system operation which provided a smooth transition and a major added benefit. The three (3) moveable lecterns each received a microphone and built-in Nice/ELAN 7-inch touch panel, while a new projection system and a wall-mounted Nice/ELAN touchpad was installed in each of the six presentation rooms. This presenter-focused design was trusted and well-liked, so no changes were made. What improved, however, was the ease-of-use, and the overall system management.

Audio feedback used to be a problem because mics couldn’t be powered on individually. That’s no longer an issue. Previously, troubleshooting, maintenance and adjustments required someone to visit the room and perform tests. Today, all this can be done quicker and easier from the mobile app. When the convertible walls are moved to combine rooms, a single button in the app now has the ability to combine the rooms’ digital infrastructure flawlessly. 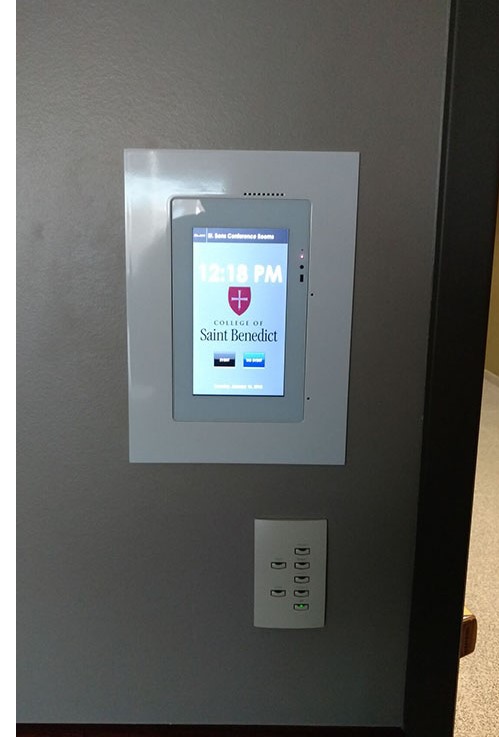 “The only complication with this install was the timeframe,” Elsner added. “Because The Gorecki Center is booked pretty much every day at College of St. Benedict they couldn’t afford to shut down for a week while we performed the upgrades. So even though problems started in June, we waited until the Thanksgiving break and then worked long days to finish before everyone returned to the college.”

Another major benefit of the new system is its upgradeability, which will keep it relevant for years to come. The system can be expanded to control more room or systems, additional automation can be programmed, and different levels of control and access can be set for different employees.  The entire system is powered and managed through a single central “brain”, the Nice/ELAN gSC10 system controller.

“J. Becher & Associates wants venue owners to see projects like The Gorecki Center because it’s a wakeup call to the fact that old, failing technology can end up costing them revenue, and, as they say, you can’t teach an old dog new tricks,” Elsner concluded. “However, when those new tricks massively simplify and improve the operation of a multi-room conference venue, it’s clear the benefits are worth the investment.”

ELAN, now part of Nice North America, develops an award-winning line of whole-house entertainment and control solutions distributed through a comprehensive channel of select dealers throughout the United States, Canada, and countries worldwide. The Nice/ELAN 8 update was honored with the “2017 Human Interface Product of the Year” award and continues to expand its intuitive functionality.

Headquartered in Carlsbad, California, NSC has over 50 years of innovation, and is dedicated to addressing the lifestyle and business needs of millions of customers every day. For further information, visit nortekcontrol.com.