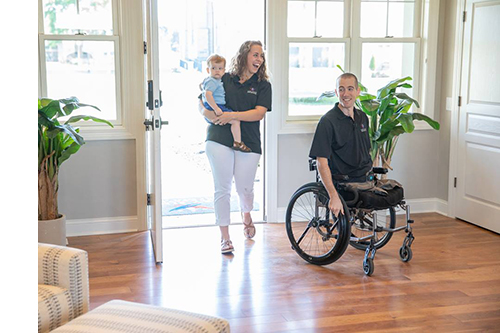 The Vogt’s new single-story home offers the family every advantage a house can provide for a veteran with limited-mobility, including mobile control of lighting, security, multi-room audio and video, and even the exterior door locks, all made possible by the Nice/ELAN Entertainment and Control System from Nice North America.

According to Nick Fabrick, Vice President of integration firm Xtend Technologies, designer and installer of the smart home system, the mobile-device control is a game-changer for Vogt and his family.

“This is my second home project with the Gary Sinise Foundation, and one thing I’ve learned is that these veterans are some of the strongest people in the world,” Fabrick said. “Many everyday tasks require relearning when mobility is limited, and the Xtend AV team is more than proud to help Nick Vogt simplify as many daily activities as possible. Through smartphones, an iPad and Nice/ELAN remotes and touchscreens, Nick can now control almost the entire home with one finger, from anywhere.”

Some daily tasks, such as checking the surveillance system, locking doors, playing music or turning off lights can be prohibitively difficult for limited-mobility homeowners like Vogt. Thanks to Xtend Technologies, the home’s Nice/ELAN system integrates all of the Lutron lighting and ceiling fans, three Schlage electronic door locks, multi-room audio and video distribution, and a security and surveillance system with five Nice/ELAN cameras. 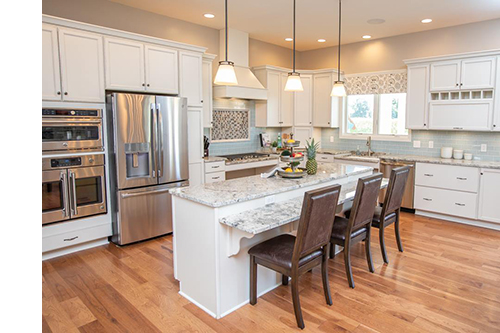 “Designing these homes is all about maximizing utility and access for the injured veteran,” Fabrick added. “In this home, we included three video zones, in the master bedroom, great room and outdoor patio, which each have their audio zone as well. With this design, Vogt and his family can use a variety of devices to control any TV or any room’s audio, even when they are in different rooms.

“No matter where the family is, they have full control. If they want to lock all the doors, it takes just a few taps. If they want to turn on the kitchen lights and patio TV, that’s also just a few taps away. They can easily check the five security camera feeds or answer the front door with the Doorbird video doorbell, which plays audio through the home’s speakers while delivering a live video feed to the Nice/ELAN mobile app, enabling Vogt to unlock the electronic locks and let guests in through the app.”

The home’s technology relies on a Nice/ELAN gSC10 and Nice/ELAN g1 to connect all the sub-systems, allowing consolidated control through the Nice/ELAN mobile app. They can also control the system through two seven-inch Nice/ELAN wall-mounted touchpanels, two Nice/ELAN remotes, and a tabletop iPad kept in a LaunchPort dock. The home’s video uses Nice/ELAN 4K over IP for distribution, while an Nice/ELAN S86A distributes six zones of audio. Five Nice/ELAN dome cameras provide exterior surveillance, which is recorded to the 2 terabyte Nice/ELAN EL-NVR-2TB rack-mount hard drive. 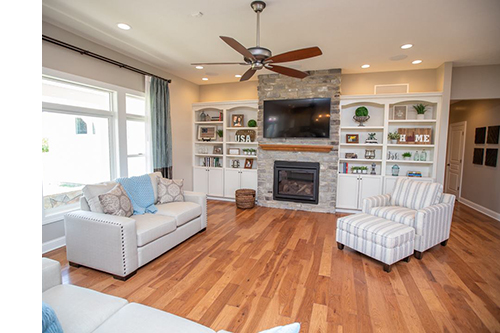 The home was also designed specifically with Nick’s needs in mind and includes features such as a   raised shower platform that he can easily access by himself from his wheelchair, lower kitchen counters and oven, wide hallways, and touchscreens mounted at lower, easier-to-access heights as well as much more.

According to Judith Otter, Chief Operating Officer of the Gary Sinise Foundation, the Vogt family’s new home was carefully designed to provide the most useful layout and technologies available. “Working with our valued partners, we’ve provided Vogt with a fully navigable home and empowering technologies to help him regain his daily independence,” she said.

ELAN®, from Nice North America, develops an award-winning line of whole-house entertainment and control solutions distributed through a comprehensive channel of select dealers throughout the United States, Canada, and countries worldwide. The Nice/ELAN 8 update was honored with the “2017 Human Interface Product of the Year” award and continues to expand its intuitive functionality with security, climate, surveillance and video distribution products and integrations.

Nortek Security & Control LLC (NSC) is a global leader in smart connected devices and systems for residential, security, access control, and digital health markets. NSC and its partners have deployed more than 4 million connected systems and over 25 million security and home control sensors and peripherals. Through its family of brands including 2GIG®, Nice/ELAN®, Linear®, IntelliVision®, GoControl®, Mighty Mule® and Numera®, NSC designs solutions for national telecoms, big box retailers, OEM partners, service providers, security dealers, technology integrators and consumers. Headquartered in Carlsbad, California, NSC has over 50 years of innovation and is dedicated to addressing the lifestyle and business needs of millions of customers every day. For further information, visit niceforyou.com.

Any other brand names and product names mentioned herein may be the trademarks, tradenames, service marks or registered trademarks of their respective owners.